Brothers John Henry Odell (1830-1899) and Caleb Sherwood Odell (1827-1892) founded the organ building firm of J.H. & C.S. Odell in 1859. They set up shop at a building on the corner of West 42nd Street and 9th Avenue in New York City and would become one of the longest lived organ-building firms established in the 19th century. The firm built just over 600 pipe organs and remained active in the Greater New York Metropolitan until 1983. Of the firm’s entire catalog, only about 70 instruments remain.

Canterbury’s pipe organ was originally built in this shop at 407-409 West 42nd Street, in New York City. The organ was first installed in the Community Presbyterian Church of Chester, NJ where it served the congregation for 100 years. Eventually, the instrument fell in to disrepair and was acquired in the 1990s by Anthony Meloni of Meloni and Farrier Organ Builders in Yonkers, NY. The organ was finally restored by Meloni & Farrier in 2016 and acquired by Canterbury in 2019.

Numbered among Canterbury’s treasures are two rare and exquisite keyboard instruments. Both instruments were donated to the parish by anonymous contributors, and we are deeply grateful and thankful to God for their generosity. Both instruments stand in the splendid acoustic of the nave and are in regular use at the 10 AM liturgy as well as other liturgies during the year.

Performances and recordings on these instruments are strongly encouraged. Please contact the Parish Musician Frederick Frahm for further information.

The specification of the instrument is consistent with “spec #4” as offered by the company in 1868:

The temperament is set to Kellner Bach.

The church also has:
Chickering Grand Piano (circa 1890) 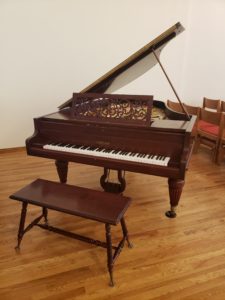 Jonas Chickering founded the company bearing his name in 1823. The firm’s building history is extensive (and colorful), and it was America’s first established piano builder. Canterbury’s Chickering was originally purchased by Galen Spencer, Mayor of Joplin, MO in the early 1890s. It remained in the family being passed down through the generations and for the last 45 years Spencer’s great great grandson (a priest) established its use at St. Andrew’s Priory in Denver and the Monastic Priory in Santa Fe. The instrument was recently restored by Alex d’ Von Boggs of Albuquerque. Canterbury acquired the Chickering piano in 2019.

St. Timothy’s Lutheran Church is seeking a Pianist. St. Tim’s is a progressive Christian community, with a love of music and eclectic musical taste.